7 Things to Know About PTSD and Alcohol Abuse 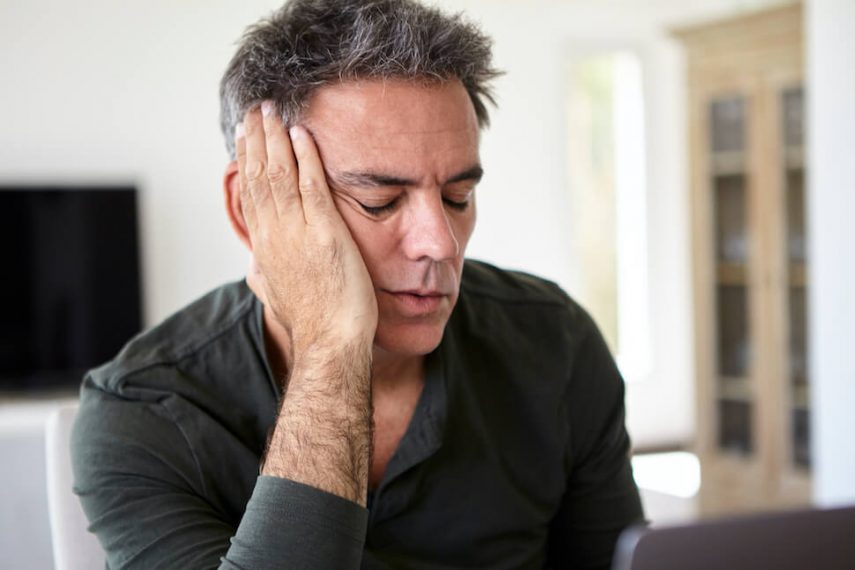 Post-traumatic stress disorder (PTSD) and alcohol use too often go hand-in-hand. One can cause or increase the risk for the other, leading to a destructive cycle. Many additional problems arise when someone with PTSD drinks, from worsening symptoms to less effective treatment. It is important to understand this connection and to seek professional, effective mental health treatment for PTSD instead of turning to alcohol.

Post-traumatic stress disorder is a serious mental health condition triggered by traumatic events. It causes symptoms that disrupt your life, but it can also cause significant complications. One of these is substance abuse.

A significant link exists between PTSD and alcohol misuse. Many people with PTSD turn to alcohol as a way to cope with symptoms. Drinking may provide momentary relief, but ultimately it makes the situation worse. Treatment for PTSD should address substance abuse for the best outcomes.

Causes and Symptoms of PTSD

PTSD is a disorder caused by trauma, although trauma is not the only factor. Not everyone who goes through traumatic experiences will develop PTSD. Genetics, existing mental illnesses, and other factors may play a role.

The types of traumas that can trigger PTSD vary: active duty in the military, witnessing violence, assault and abuse, natural disasters, and even refugee experiences. It may be one terrible event or ongoing traumas.

There are four main types of PTSD symptoms:

PTSD is a disruptive condition, making it challenging or impossible to live normally. The good news is that PTSD is treatable. Therapy, especially trauma-focused therapy, medications, support, and coping mechanisms can help you regain control over your life.

Substance use can complicate PTSD symptoms and interfere with treatment. It can also lead to a substance use disorder. You may be tempted to drink to soothe difficult emotions or forget trauma, but alcohol only causes more problems. Here are five things you need to know about PTSD and alcohol abuse:

1. People Diagnosed With PTSD Have Higher Rates of Alcohol Abuse.

According to the National Center for PTSD, as many as three-quarters of people who have experienced violent abuse or assault report having issues with drinking later. Nearly a third of people who have gone through serious accidents, illnesses, or natural disasters develop drinking problems. Not all of these people have PTSD.

2. Combat Veterans With PTSD Are More Likely To Drink To Cope.

Military veterans represent another important population for PTSD and drinking. Between 60–80 percent of Vietnam veterans report alcohol issues when seeking treatment for PTSD. Binge drinking is particularly prevalent among veterans with PTSD as compared to other groups.

A recent study looked at a population with PTSD and compared those with past combat experience and those without. Those with combat in their pasts were more likely to use alcohol to cope with PTSD symptoms. This finding could lead to more intensive substance use screening for patients with combat trauma.

3. Symptoms of PTSD and Alcohol Use Disorder Differ by Gender.

An important recent study found that male and female lab animals with both conditions exhibit different symptoms and brain changes. Although not studied in humans, this research is important. It could help inform treatments that are more effective based on gender.

Researchers saw one important difference at the molecular level. Males had increased GABA receptor function in the brain. GABA is a neurotransmitter, or brain chemical, that reduces neuron activity and has a calming effect. In females, brains released more GABA. This could inform the future development of medications.

The researchers also found that males expressed a biomarker that females did not. The marker predicted alcohol use after trauma. They expect females to have a different biomarker yet to be found.

4. Many People With PTSD Turn to Alcohol to Self-Medicate.

The symptoms of PTSD are difficult to live with and to tolerate. A leading theory to explain the strong association between PTSD and drinking is self-medication. If you have PTSD symptoms, you may turn to alcohol to numb them or in an attempt to avoid or forget traumatic memories and intrusive thoughts.

Research backs up this idea. Studies have shown that a traumatic stimulus triggers people with PTSD and an alcohol use disorder to crave alcohol. When those people are presented with a neutral stimulus, there is no increase in cravings.

In other words, you may begin using alcohol as a way to cope with PTSD symptoms, but it becomes a dangerous learned behavior. Any reminder of the trauma triggers your brain to want more alcohol.

In the moment, a drink—or several—may seem like a useful way to manage symptoms. Drinking can temporarily help you forget the trauma or drown out negative thoughts. In the long-term, though, this strategy backfires. Alcohol tends to worsen several common symptoms and complications of PTSD:

Alcohol use also causes its own problem, related to both mental and physical health. These, in turn, may contribute to worsening symptoms in a counterproductive cycle.

Drinking as a coping mechanism is a form of avoidance, and this can mean that you only prolong your symptoms. Most people with PTSD have an urge to avoid any memories or flashbacks of the trauma. Drinking is one strategy for doing this.

The problem with avoidance is that it never resolves the problem. Effective treatment for PTSD focuses on going back to the original trauma and reliving and processing it in a safe environment. Avoidance is a surefire way to make PTSD last longer, and it makes treatment less effective.

7. Treatment Must Address Both PTSD and Drinking.

Because these two issues are so intimately connected, it is essential that treatment address them both. PTSD treatment without concurrent alcohol treatment can lead to ongoing substance abuse and a return to PTSD symptoms. The opposite is also true. If you address your drinking while still avoiding a traumatic past, you are unlikely to have much success.

It is up to professionals to screen people in treatment for co-occurring disorders. They must consider the fact that a patient presenting with PTSD may be drinking excessively. For patients with alcohol use disorder, it’s important to look at their pasts for any signs of trauma.

If you struggle with past trauma and drinking, seek professional help. Neither of these issues is likely to go away without intervention. A good treatment program will design a program tailored to your individual needs. It will help you process trauma, stop drinking, and learn new, healthier coping mechanisms going forward.