Rocky Mountain Highs and Lows: Colorado as a Test Case for Marijuana Legalization 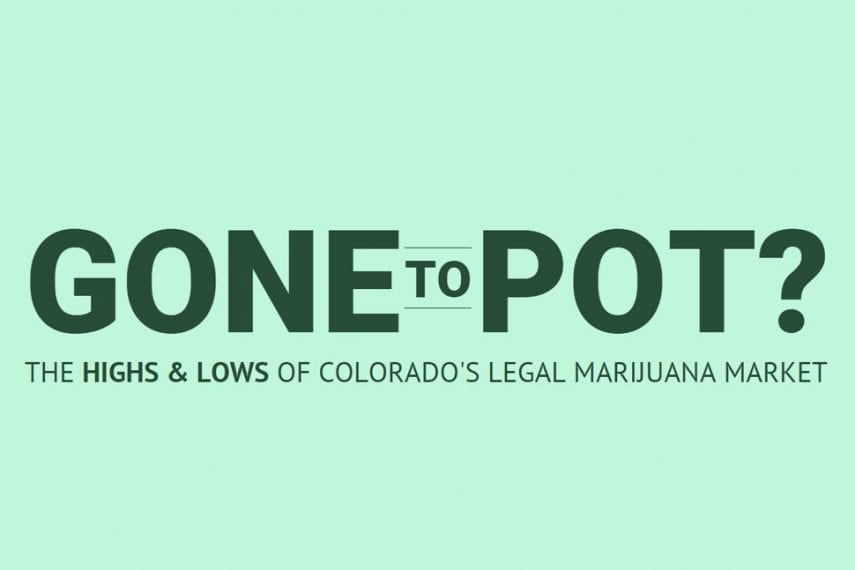 On January 1, 2014, U.S. Marine and Iraq War veteran Sean Azzariti walked into the 3D Cannabis Center in Denver, Colorado, and bought an eighth of Bubba Kush and a pot-infused chocolate truffle. As he handed $59 to the cashier, he became the first person to legally buy recreational marijuana in US history. “It’s huge. It hasn’t even sunk in how big this is yet. This is what we worked so hard for the last few years. It’s mind-blowing,” he said, reveling in the historic moment.

The passing of Colorado Amendment 64 in 2012 legalized the use of marijuana for recreational purposes for adults 21 and over, along with commercial growth, production, and retail sale of recreational pot in licensed stores. As the first state to allow such access (with Washington following closely on its heels), it serves as a kind of laboratory in which we can see the reality of legalization play out after years of theoretical speculation from both prohibitionists and pro-legalization activists. With several states poised to follow in Colorado’s footsteps, and presidential contenders grappling with the question of federal legalization on the campaign trail, now is the time to examine the impact legal recreational marijuana has had so far.

While legalization opponents warned that access to legal marijuana would lead to an increase in criminality, such worries have not come to fruition; overall crime levels remain consistent with pre-legalization levels, and murders, sexual assaults, and robberies have fallen. Concerns that pot use amongst teenagers would skyrocket also appear to be unfounded according to currently available data; the Colorado Healthy Kids Survey found decreased rates of marijuana use amongst high school students after legalization. While 25% of high school students reported using pot in the past month in 2009, only 20% of students did in 2013, the first full year of legalization. Similarly, the lifetime use rate of students dropped from 45% in 2009 to 37% in 2013. This is in contrast to national increases in both past month and lifetime use (20.8% to 23.4% and 36.8% to 40.7% respectively). Mason Tyvert, co-director of the campaign to pass Amendment 64, said, “The drop in teen use reflects the fact that state and local authorities have far more control over marijuana than ever before.” Others, however, dispute the relevance of the numbers, pointing out that while growing marijuana plants for personal consumption and sharing pot with friends was legal in 2013, retail outlets did not open until the following year. The true effect of legalization won’t be measurable until the impact of retail marijuana stores is accounted for.

What is not in dispute is the veracity of legalized marijuana as an economic engine. On January 1st, 2014, there were 30 retail pot stores in Colorado. Today there are 322, along with “397 cultivation sites, 98 infusion businesses and 16 testing facilities.” Legal marijuana is now the fastest-growing industry in the United States and has created thousands of jobs in the state of Colorado, where there are currently over 16,000 licensed pot industry workers. The success of the recreational marijuana business has contributed to a 4.2% unemployment rate in the state as of April 2015, the lowest level since 2008 and well below the national rate of 5.1%. Earlier this year, Business Insider declared Colorado the 3rd strongest economy in the country.

Legalized pot hasn’t only been good for business, it’s been a boon for the public coffers as well. In the first year of legalization, over $44 million of tax revenue was generated by the sale of retail marijuana, a large portion of which is earmarked for public school funding. This year, recreational marijuana sales are expected to exceed $420 million, generating an estimated $82.8 million in taxes and fees. The tax figures also don’t account for the $2.25 million saved annually by law enforcement, who no longer have to go after adults using marijuana recreationally.

Many are seeing the financial success of Colorado’s marijuana industry as an opportunity to generate support for pot legalization across the country:

Among activists and weed-business interests alike, there’s a major sense of urgency: The idea is to use the current momentum to pass pot-friendly laws in so many states that the federal government, which still classifies marijuana in the same legal category as heroin, will have to accept the new reality. The potential financial upside of ending prohibition is enormous: Estimates of the value of the legal market range as high as $110 billion.

Regardless of personal interest in marijuana, the promise of financial gain is alluring, and is drawing interest from people across the political spectrum. However, not everyone is enthusiastic.

The Spectre of Danger

While the statistics may seem shocking, closer inspection of raw data indicates that the 32% increase in marijuana-related traffic deaths reflects a jump from 71 deaths in 2013 to 94 deaths in 2014. Traffic-related deaths as a whole have dropped since 2008, when marijuana remained illegal. Furthermore, the advocacy group describes all traffic fatalities in which a driver tested positive for THC, the active ingredient in marijuana, as “marijuana-related,” when in fact a positive THC test does not imply any such causal relationship. You can test positive for THC long after the drug has stopped affecting you; in fact, it can stay in your bloodstream for weeks. If more people are using marijuana due to medical and recreational availability, it makes sense for more people to test positive for THC, but does not mean that people are intoxicated behind the wheel. Similarly, “marijuana-related emergency department visits” include all visits during which marijuana was mentioned by a patient or THC was discovered during lab testing, and does not imply that marijuana was the cause of the emergency. More stringent, methodologically-sound studies need to be done to determine the true effect of legalization on these events.

The Persistence of the Black Market

One of the biggest lures of legalization has historically been the idea that safe, legal availability of marijuana will put an end to the underground drug economy and drug cartels. However, only 60% of the marijuana sold in Colorado comes from legal sources and, according to a CNBC interview with Colorado Attorney General John Suthers, “there’s no indication as yet that legal pot has reduced the presence of the cartels in Colorado, or undermined any other aspect of the black market.” One factor that is keeping the black market alive is the high cost of legal recreational marijuana in Colorado, where 1/8th of an ounce retails for $70.90, while the same amount can be bought from an unregulated dealer for only $30. In an effort to compete with the lower prices of the underground market, Colorado recently amended its 10% tax rate on recreational marijuana to drop to 8% as of early 2017, as well as establishing a tax holiday on September 16th of this year, allowing customers to forego sales tax altogether for one day. Time will tell what impact, if any, the changes will have on black market sales, and how it will affect the tax revenue that makes legalization such an attractive option to many.

Customers aren’t the only ones with incentive to turn to the black market. The heavy regulations sellers must comply with to legally supply customers with marijuana is making some producers and dealers stay underground. The International Business Times recently profiled one dealer who left the legal marketplace to avoid the time-consuming and profit-eating effects of legalization:

He used to sell marijuana legally, he says. He owned a business that operated out of a modest building in Denver, but he grew disillusioned following what he saw as excessive regulation, uncertainty and taxation. College educated and previously struggling to keep up with the city’s rapidly rising rents, he says he now operates his marijuana business much the same way he did in high school: out of his car. Skirting these regulations and free of overhead costs, sales tax and MED regulations, this dealer estimates he’s making two to three times as much money as when he owned his marijuana business.

This is one challenge that Colorado has yet to address, and there may be no easy answers. After years of maximizing profits through tax avoidance, minimal overhead, and no oversight, it may be difficult to convince dealers to start working legitimately. Compounding the problem is the scarce availability of funding for black market actors who want to start legitimate businesses. Traditional lending institutions will not provide financing or even basic banking services due to federal laws criminalizing marijuana. So far, attempts to create specialized financial services have been met with serious roadblocks; in July of this year, the Federal Reserve denied a master account to The Fourth Corner Credit Union, a start-up financial institution aimed at serving Colorado’s marijuana industry. The credit union plans to challenge the decision in court and has launched a lawsuit against the Federal Reserve.

The Impact on Surrounding States

While Colorado struggles with its own marijuana black market, legalization has made Colorado the supply center for black markets in other states, particularly nearby Wyoming, Utah, Oklahoma, and Nebraska. Late last year, general attorneys of Nebraska and Oklahoma filed a lawsuit in the U.S. Supreme Court to strike down Colorado’s recreational marijuana law in an attempt to stop the drug from crossing into areas where it remains illegal. The suit has been met with strong criticism even amongst conservative legislators, and legal experts believe it is unlikely to succeed, but it does reflect a growing concern amongst law enforcement officials regarding the potentially destructive effects of legalization. According to Oklahoma’s Bureau of Narcotics and Dangerous Drugs, the state is seeing an influx of “high potency” marijuana making its way from Colorado. Agency spokesman Mark Woodward says, “Whether it’s people driving to Colorado and bringing it back, or mailing it through the Postal Service, it’s getting here. This is marijuana with very high concentrations of THC, very strong stuff.” In an attempt to curb illegal border-crossing, Colorado launched a $5.7 million ad campaign to raise awareness of federal laws prohibiting the trafficking of pot over state lines.

Colorado’s marijuana legalization policy has forever changed the landscape of drug policy discourse in the United States, and is allowing us to see firsthand what legal access to marijuana looks like in practice. While there are undoubtedly economic benefits to legalization, its full sociocultural impact remains to be seen. In the coming years, we will be able to more closely examine the effects of Amendment 64 as more extensive and reliable data becomes available, providing us with a more fully developed picture of its triumphs and challenges. Only by looking at the full scope of marijuana legalization will we be able to tailor policies to optimize the safety, health, and prosperity of our communities.