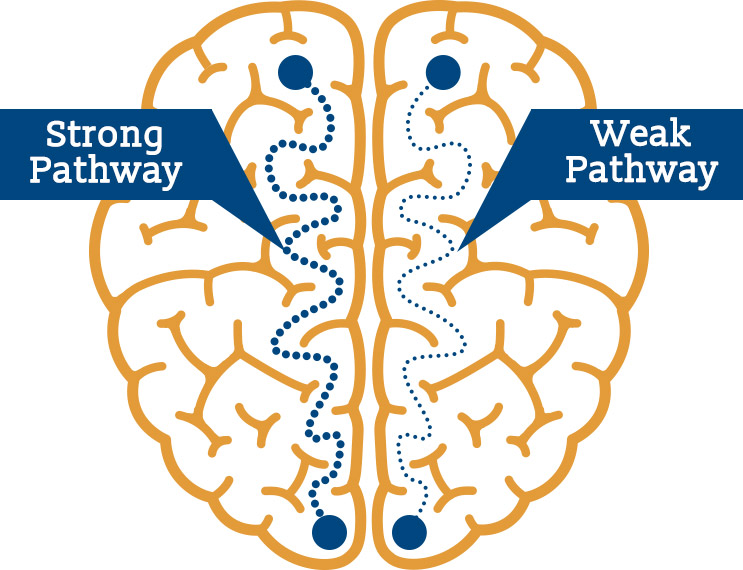 Neuroplasticity and the Recovering Brain

The elastic qualities of our brains that make it so easy to slip into addiction also make it possible to get out. Your brain isn’t simply primed for drug abuse—it’s primed for rewards. And, just as the habit of addiction teaches your brain to seek out your substance of choice, you can also teach it to seek out rewards that give you healthier pleasures instead, like meditation, friendship, and exercise, in order to heal from the damage drugs have done. This is the power of neuroplasticity.

Scientists used to believe that the brain stopped developing once humans reached adulthood. Advances in medical imaging technologies, however, have discredited this understanding of the brain, which we now recognize as an extraordinarily dynamic organ that continues to develop in response to environmental stimuli throughout our lives. This phenomenon is known as neuroplasticity.

Neuroplasticity allows our brains to continuously change and adapt, forging new neural connections as needed, and abandoning pathways we no longer use. Indeed, neuroplasticity makes it possible for the brain to cope with dramatic environmental changes, like traumatic injury, as healthy nerve cells seek out connections with each other to compensate for damage and restore function.

But even everyday experiences, thoughts, emotions, and behaviors shape the way your brain works, constantly strengthening those neural connections you use and weakening those you don’t. As you establish cognitive and behavioral patterns, you “wear in” particular neurological paths, using them again and again until they become second nature.

Neural pathways function as roads between points of interest in the brain and nervous system. Each time you think, feel, or act, you forge a new mental path.

Each time you repeat a thought, feeling, or action, we strengthen that neural pathway. The more habitually it is used, the stronger its pathway becomes, while the less frequently a pathway is used, the more it weakens over time.

Human evolution has granted you with, among other things, highly-developed reward centers that encourage you to seek out activities essential to species survival, such as food, sex, shelter, and nurturing. When the reward pathway is activated, the brain floods with dopamine, a powerful neurotransmitter associated with feelings of intense pleasure. Your brain, meanwhile, makes a note that this is something important to remember, encouraging you to participate in that activity again in the future.

Drugs also cause dopamine release but at levels many times greater than that which is possible via natural rewards, making them a uniquely appealing way of stimulating the reward center and a high-priority item for your brain to remember. Due to neuroplasticity, however, the brain begins to adapt to its new conditions by developing tolerance and demanding higher and more frequent doses of the drug to produce the same effects.

Simultaneously, it suppresses its own production of neurotransmitters as it seeks to compensate for the artificial introduction of chemicals, depending instead on increasing amounts of drugs to maintain equilibrium. If the drug is discontinued, your brain does not have the neurotransmitter supply available to compensate for its loss. As a result, you begin to experience withdrawal symptoms, both observable and unobservable.

THE CYCLE OF PLEASURE AND REWARD

Your brain is prewired to seek out activities associated with survival. When we complete such an activity, the reward pathway is activated, flooding the brain with dopamine—which motivates us to want to repeat the action in the future to get another dose of feel-good dopamine. When we eat a tasty lunch at a restaurant, for example, we want to return to that restaurant to revisit the pleasure of eating that meal again.

Addictive substances work in a similar way, training your brain to crave the reward that results from using and driving you to use again, creating a vicious cycle from which it is difficult to break free. 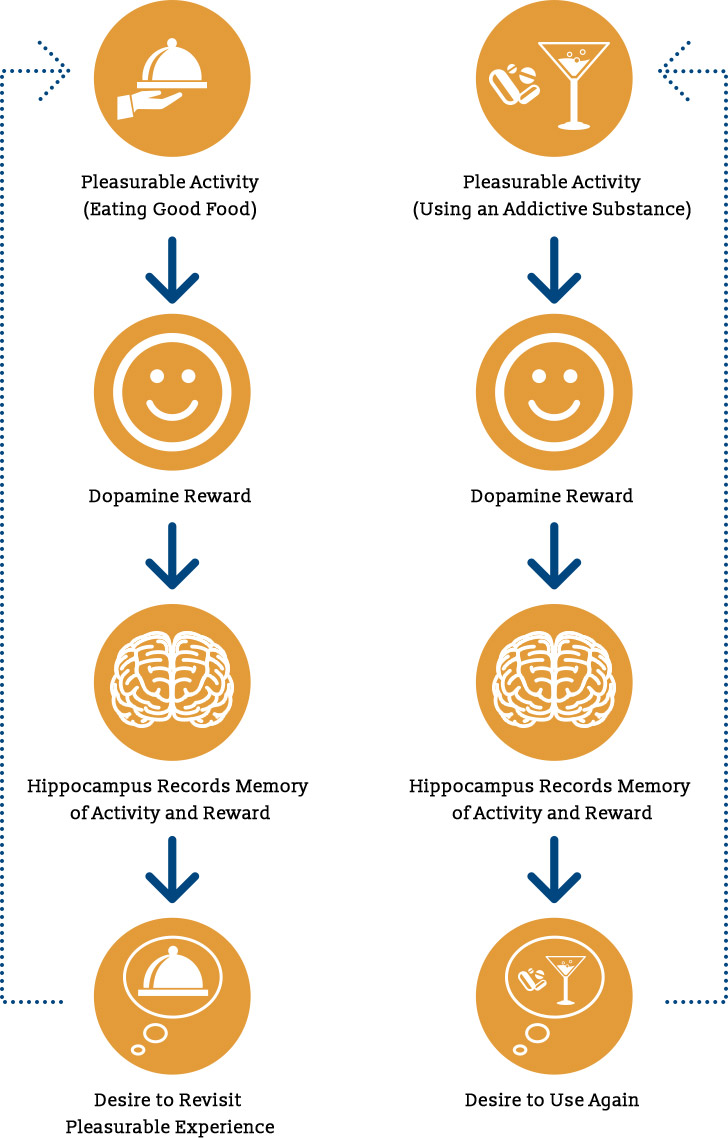 “The reward pathway is intimately connected to our judgment and emotional areas. Judgment becomes distorted and the brain begins to treat the substance as necessary for survival.”

In either case, the underlying factors that make a behavior or substance addictive are the same.

Over time, repeated use of an addictive substance creates a tolerance in your system which lessens the impact of the reward the drug triggers.

Furthermore, social, environmental, and emotional triggers can exacerbate this cycle and cause a downward spiral.

“For relapse prevention, it is crucial to understand the environmental cues that trigger cravings. Recovery is rechanneling the brain so that when those cues come, your brain is channeled to brain-healthy activities. Eventually, when the craving occurs, the brain returns to homeostasis much more readily. Recovery becomes more natural, and you get the healthy reward.”

How Neuroplasticity Can Aid Addiction Recovery

While the adaptability of the brain is one of the reasons we are vulnerable to addiction, it is also one of our greatest assets when it comes to recovery. Through deliberate practice, you can disrupt the damaging neural connections that drive your drug use and rewire your brain using healthier thoughts, feelings, and behaviors.

This is particularly useful when practiced in response to the triggers that induce overwhelming cravings and threaten your sobriety; by recognizing the trigger and consciously deciding to engage in healing, you are training your brain to associate those triggers with safe, pleasurable rewards rather than dangerous substances. Over time, your brain naturally reorganizes itself around your recovery and your new, healthy habits.

“Rewiring requires setting new goals and practicing the healthy pursuit of reward while the brain is creating new pathways.”

As the power of neuroplasticity becomes increasingly recognized within the recovery community, clinicians have begun examining how to best harness this power to reduce relapse rates. Mindfulness-Based Relapse Prevention (MBRP) has emerged as one of the most promising strategies for training us to think and act in a mindful way that lets us observe and acknowledge cravings without succumbing to them. This trains our brains to sit with “uncomfortable states and challenging situations without automatically reacting to them”, giving damaging pathways a chance to heal and opening up opportunities to create new, healthy neural connections.

Mindfulness is about becoming consciously aware of our thoughts and decisions, observing our inner experiences as if they were happening to someone else.

“Mindfulness and meditation are essential for helping the brain to create new pathways.”

How to Improve or Maintain Neuroplasticity

We all know that exercise is good for the body, but many of us forget that the brain also needs a good workout to keep it in tip-top shape. By participating in highly focused activities that engage you mentally, you are training your brain to stay sharp and actually expanding your ability to learn new skills and behaviors. Not only does this fortify your ability to heal from addiction, it also helps you fight age-related cognitive decline and may even protect you from degenerative brain disease.

Giving your brain new and challenging tasks helps you improve neuroplasticity and enhances your cognitive abilities.

General benefits of brain training include:

The discovery of neuroplasticity has fundamentally changed the way we understand addiction and the possibilities of recovery. By seeking out a residential addiction treatment program guided by a medical model of addiction, you can engage in an intensive, holistic curriculum designed to harness the power of neuroplasticity to promote healing. Removed from the stressors of everyday life, these residential programs give you the time and space you need to focus on your recovery while minimizing potential triggers that threaten your sobriety.

At the same time, you’ll be able to participate in therapies developed specifically to alleviate withdrawal symptoms and promote the restoration of healthy brain function, helping you find freedom from drugs once and for all. With the support of compassionate clinicians and peers, you can practice new, healthy patterns that will sustain you long after you leave treatment. 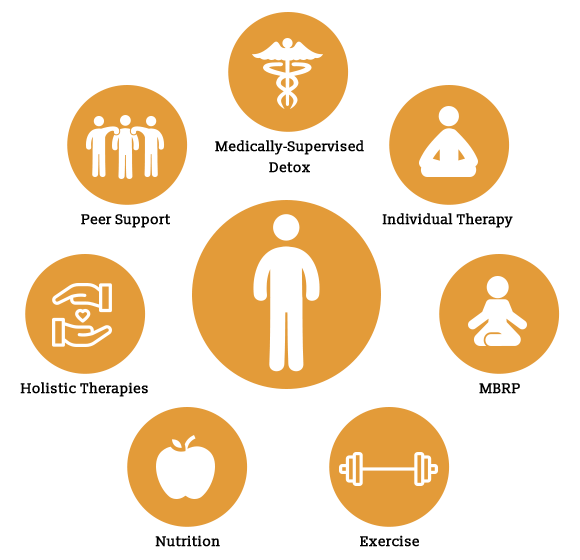 At Alta Mira, we are committed to providing evidence-based addiction treatment of the highest quality. We recognize the tremendous promise neuroplasticity holds for people struggling with addiction, and create personalized treatment experiences that help our clients heal from the damage of drug abuse. Using a comprehensive curriculum of proven therapies, we invite you to explore your own healing abilities and develop strategies to create positive and lasting change, mind, body, and spirit. Contact us to learn more about our renowned programs and how we can help you or your loved one start the journey toward recovery. 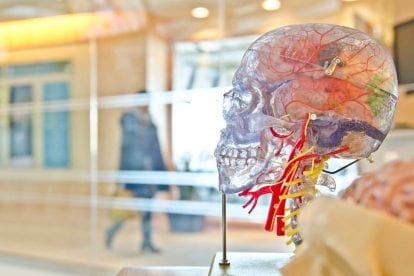 Harnessing Neuroplasticity in the Brain as a Way to Manage ... 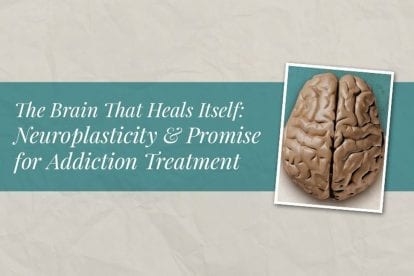 The Brain That Heals Itself: Neuroplasticity and Promise for ...