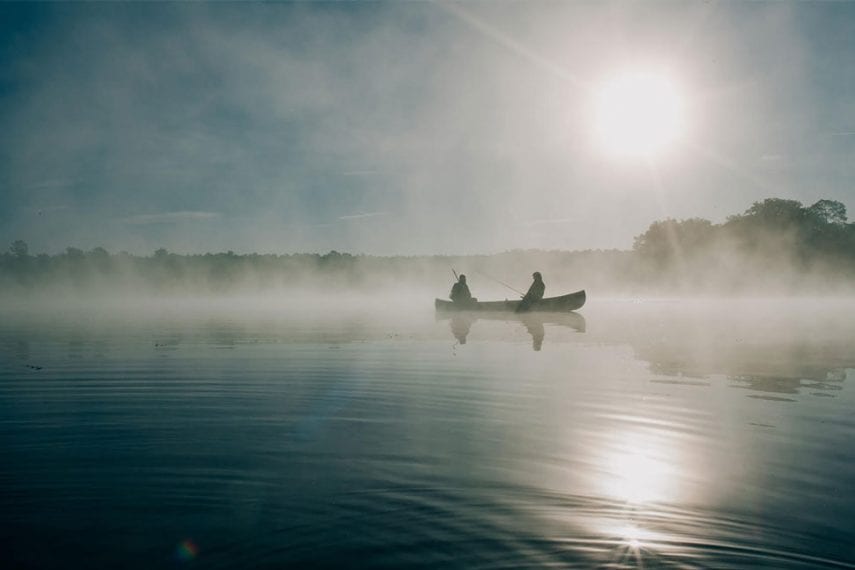 Addiction lies. Addiction makes you convince yourself that it’s normal to get a DUI – it could happen to anyone! Addiction makes you tell your wife that you only had two beers when in fact you had twelve. Addiction tells you that drugs are the answer to, not the cause of, your problems. And, worst of all, addiction tells you that it is not addiction at all. In order to sustain its path of self-destruction, addiction drives you to invent all sorts of ways to deny that you have a problem with drugs and justify even the most desperate and glaring addictive behaviors. Everyone needs to blow off steam. I’m in control. I could stop if I wanted to.

But some lies about addiction don’t just emerge from your relationship with drugs themselves, but are part of our shared cultural narratives about substance use. One of the most pervasive and insidious lies is the idea that some drugs are not addictive, a falsehood that helps many users stay in denial about their addiction, and prevents those who want to quit from getting the help they need.

Addiction Is Not Defined by Physical Phenomena

The effects of some drugs make it impossible to deny their destructive nature. The sweating, vomiting, and muscle pain of heroin withdrawal or tremors and seizures that can result from sudden discontinuation of alcohol are clear indications that physical dependency has taken hold and is now being violently disrupted. Other drugs, however, do not infiltrate physical systems in the same way and, thus, discontinuation does not produce readily observable withdrawal symptoms. Too often, the absence of physical dependence and physically traumatic withdrawal is taken to indicate that the drug isn’t addictive. For many, this perceived lack of addictive potential is a central component of their drug choice and a part of their own justification for continued drug use; countless marijuana and MDMA/ecstasy users grab onto the myth of non-addictive drugs to deny their own addictions.

Physical dependence and addiction, however, are discrete phenomena that are sometimes, but not necessarily, related; being physically dependent on a substance doesn’t in and of itself indicate that you are addicted—and you can be addicted without being physically dependent. This is because addiction is not a physical illness, but a chronic brain disorder; it is not characterized by the presence or absence of physical phenomena, but by user behavior. As the National Institute on Drug Abuse states, “Addiction is defined as a chronic, relapsing brain disease that is characterized by compulsive drug seeking and use, despite harmful consequences.” As such, observable withdrawal symptoms, while extraordinarily meaningful for treatment, are entirely irrelevant when determining whether or not you are experiencing addiction. Hence, you can become addicted to any psychoactive substance, including those that will never leave you sweating, aching, vomiting, or shaking. 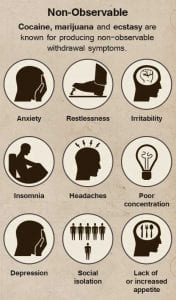 The fact that discontinuation of a substance doesn’t produce physical withdrawal symptoms also doesn’t mean there is no withdrawal at all. As your substance use has escalated, your brain has adapted to its chemically altered state by modulating neurotransmitter activity to account for the presence of drugs. Over time, your brain comes to depend on a constant supply of those drugs to maintain chemical equilibrium, and sudden discontinuation disrupts the delicate balance it has achieved. As a result, you may experience a host of non-observable withdrawal symptoms as your brain struggles to adapt to its new state. These symptoms may include:

While opiate addicts and alcoholics often fear the physical discomfort of detoxification, people who are addicted to drugs without observable withdrawal symptoms often underestimate the potential trauma of sudden discontinuation, and don’t seek the help they need to get through this difficult time. Too often, users who want to quit don’t have the supports necessary to cope with detox, and resume using to avoid the emotional and cognitive distress of withdrawal.

Understanding the truth about addiction is critical to helping people make informed decisions about their own health and allowing people who are addicted to drugs like marijuana and MDMA to recognize what is happening to them. Just as importantly, understanding the impact of non-observable withdrawal symptoms gives you the knowledge you need to anticipate and plan for your own detoxification experience and minimize your risk of relapse.

If you are discontinuing a drug not known to produce observable withdrawal symptoms, you may want to seek professional guidance to help you cope with the emotional and cognitive symptoms of withdrawal in either an outpatient or a residential setting. While non-observable symptoms may make withdrawal physically easier, they can be just as traumatic as observable symptoms—and sometimes even more so; the depression and anxiety that often arise in the acute phases of withdrawal can severely impair function, threaten your emotional well-being, and even lead to self-harm and suicide. As such, being monitored within a safe, supportive environment during this critical time can be essential to staying safe. By seeking the help of highly trained addiction medicine specialists, you can ensure that you receive the emotional support, therapies, and any pharmacological interventions you need to minimize the trauma of withdrawal and stay balanced as your brain begins its healing process.

Alta Mira offers a comprehensive suite of addiction treatment programs to help people struggling with drug addiction, co-occurring mental health disorders, and co-occurring process addictions find freedom from substance abuse and restore psychological health. Our innovative range of residential and outpatient options give you the ability to choose the services that best suit your unique needs, allowing you to heal in a way that makes sense for you. We encourage you to contact us to learn more about our programs and to find out how we can help you or your loved one begin the journey towards recovery.

To learn more about withdrawal from alcohol and other substances, click here to check out our infographic.